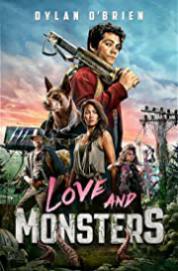 In the wonderful world, Joel learns that his girlfriend is only 80 miles away. To embark on a dangerous journey, Joel discovers his inner hero as the girl of his dreams.
Director:
Writers of Michael Matthews:
Brian Duffield (screenplay), Matthew Robinson (screenplay) Seven years after the Monstropocalypse, Joel Dawson (Dylan O’Brien) has lived underground with the rest of humanity since giant creatures took power. After a radio connection to his high school friend Amy (Jessica Henwick), who is now 80 miles from the coastal colony, Joel falls in love with her again. When Joel realizes that he has nothing left underground, he decides against any logic and enters Emeis, despite all the dangerous monsters in his path. Michael Rucker and Ariana Greenblatt also play a role in a fun and eventful adventure.